Women In International Security (WIIS) is the premier organization in the world dedicated to advancing the leadership and professional development of women in the field of international peace and security. WIIS (pronounced “wise”) sponsors leadership training, mentoring, and networking programs as well as substantive events focused on current policy problems. WIIS also supports research projects and policy engagement initiatives on critical international security issues, including the nexus between gender and security.

WIIS Poland was launched in November 2017 during the international conference Warsaw Security Poland as the newest affiliate of the WIIS Global. The organization was created within the Casimir Pulaski Foundation – independent and apolitical think tank, which focuses on issues from fields of foreign policy and international security. WIIS Poland promotes women in Poland and Eastern Europe, who are invested in the peace processes – peacemaking and peacekeeping – and international security. The national chapter of WIIS in Poland is the first step to enhancing the outreach of the network of the whole organization and to promoting Polish experts globally.

The inauguration meeting of WIIS Poland will take place early in 2018 with the patronage of Secretary of State Anna Maria Anders, and will allow to present and discuss the plans for the first year of its activities. During the meeting, interested parties will have a chance to register for membership as WIIS Poland and gain access not only to the WIIS Global network but also to other opportunities offered by the organization – i.a. attending networking meetings, seminars and workshops, and mentoring programs. 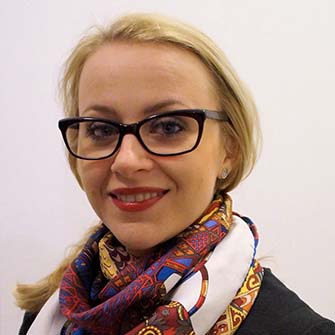 Associate Professor, Faculty of Political Science and International Studies at the University of Warsaw; key area of research: studies on terrorism and intelligence studies. A scholarship holder of the University of Indiana in Bloomington (2013), the University of Konstanz (2008, 2015, 2016) and the Vienna University (2015). Member of Women’s Intelligence Network (WIN), the Institute for National and International Security (INIS) and social expert of the Government Centre for Security (RCB). Author of various works on security studies inter alia: ‘The Conspiracy of Silence: The CIA Black Sites in Poland’, International Politics (2021), Feminist Perspectives on Terrorism: Critical Approaches to Security Studies (Springer 2020); ‘The Polish Counterterrorism System and Hybrid Warfare Threats’, Terrorism and Political Violence (together with P. Gasztold, 2020). She also conducts research on women in peace and security finalized in a book with coeditor K. Oblińska PhD entiteled Kobiety w systemie bezpieczeństwa państwa (Women in state security system 2021). 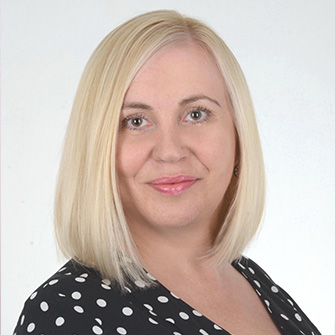 Police colonel (r); PhD in social sciences, specializing in management in the information environment; former Head of the Polish SIRENE Bureau; participant in a peacekeeping missions in former Yugoslavia (SPU Kosovo, EUPOL Proxima FYROM). In addition, involved in actions for inequalities in uniformed services due to equality policy. She served as chairwoman of the team for equal opportunities strategy in the Police Chief of Police; head of the Polish delegation in the European Network of Policewomen; deputy chairwoman of the Team of Uniformed Services with the Government Plenipotentiary for equal importance in the Chancellery of the Prime Minister. Author of many national and international publications in the field of security, management, organizational culture and international cooperation. Lecturer at universities (UW, WSFiZ, the Polish Education Center), expert at the Institute of Security and International Development (BiRM). The owner of the training companies “EGIDA Trainings for Women PdD Kornela Oblińska”. 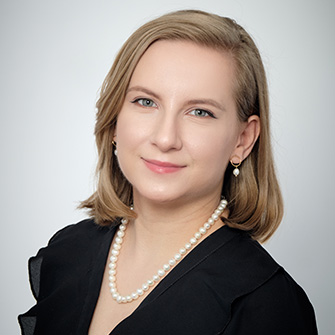 Holds a Master of International Relations from Collegium Civitas in Warsaw. She also graduated in Cultural Studies from the SWPS University of Social Sciences and Humanities, where she specialized in Asian studies. Her research interests include a strategic culture of the People’s Republic of China, conflicts and cooperation in the Asia-Pacific Region, international security and terrorism. On top of that, she is very passionate about gender equality, feminism and LGBT-related issues. Anna Dombek has been a part of the Women In International Security (WIIS) Poland since early 2020. As a representative of the Polish chapter, she has been working on the #SHEcurity initiative – a project led by German MEP Hannah Neumann that aims to highlight inspiring women in the field of peace and security. At WIIS Poland, Anna handles event management and social media content creation. Anna is also interested in cross-culture communication; films of Hollywood’s Golden Age; true crime; globalization, queer pop culture and beauty industry and aesthetic surgery in South Korea.

Philanthropist, activist, and ambassador of Polish women’s entrepreneurship, interested in diplomacy and national branding. She obtained a Master’s degree in Journalism and Social Communication from the Jagiellonian University in Kraków. She developed her leadership skills as a manager in the real estate sector. Patrycja Kubiak actively supports the participation of women in building security and peace in the world. She is a creator of charity projects supporting children on a global scale. Her latest project, Pakistani Woman, is dedicated to children from the southern part of Asia. She was a member of the Program Board of the mentoring program, Top Women In Real Estate. She appeared twice in the book Success Is A Woman and appeared in the FORBES Woman magazine. For nearly 2 years she was the Secretary General of Women In International Security. Currently, Charity Ambassador in the WIIS Poland organization. Her passion is pre-war Polish architecture, Italian fashion, art and culture.