The Politics of Fear: Right Wing Anti-Gender and Anti-Vaccination Narratives

Back to Blog Back to Publications Back to Events
written by WIIS On April 20, 2022 in WIIS Blog

Towards the end of January 2022, a Canadian trucker movement, which calls itself “Freedom Convoy,” made headlines for its loud and partially violent reaction to cross-border vaccination mandates between the United States and Canada. The protests quickly devolved into a mix of anti-government and far-right activism, with common appearances of both Confederate flags and references to the January 6 insurrection. This is just one example that shows how anti-lockdown, anti-mask, and anti-vaccine talking points have become a new battleground for the far right. While the overlap between Covid-19 and far-right activism has been recognized and discussed by both journalists and academics, there has been little to no discussion of the similarity with anti-gender movements of the 2010s.

Back then, cross-border movements mobilized in opposition to what they called “gender ideology” across Europe and the Americas. ”Gender ideology” has been called an empty signifier because it is so ambiguous and imprecise that it has served as a canvas for a range of right-wing grievances such as the right to same-sex marriage, abortion, and the inclusion of queer experiences in school curricula. At the core of these different “anti-gender” grievances lies a rejection of the knowledge that gender is socially constructed and expands the binary of male and female. While anti-gender movements have lost most of their popular momentum over the last decade—with the exception of the United States, where another wave of protests of queer learning material has just recently made the news—the rejection of gender diversity has since become a staple of the far right and has united supporters across geographic locations.

Comparing these anti-gender discourses to the discourses that underline recent anti-Covid movements can provide new insight into both the role of gender in the current anti-vaccine mobilizations as well as expose how both narratives reject academic evidence and dehumanize those who are already vulnerable in society.

One important aspect, which unites the narratives  around gender and the pandemic, is the rejection of academic knowledge. The long-standing anti-intellectualism that is part of right-wing populist discourses benefits from viewing the university as a detached ivory tower where elites are plotting against the people. The strong narrative of universities as spaces of radical left-wing or “cultural Marxist” propaganda can easily be mobilized to discredit scientific analysis.

During the last decade, this anti-academic viewpoint was mostly confined to social sciences and gender studies. The attack on social sciences by branding them as illegitimate propaganda was most obviously pushed by Hungary’s Prime Minister Viktor Orban, who succeeded in abolishing gender studies throughout Hungary. But this strategy is not specific to Europe; it has advanced across many countries and continents. For example, in the United States, Fox News’ Tucker Carlson, a right-wing media figure, is known to hold grotesque views about gender studies. In a recent show, he blamed gender studies for the failure of the U.S. intervention in Afghanistan. Carlson often uses references to the natural sciences to bolster his claims and justify the rejection of social sciences, thereby pitting “real sciences” such as biology against a ”fake” social science, even though most biological studies confirm rather than disprove gender diversity.

In the context of the Covid-19 pandemic, this division of “good science” and “bad science” is being challenged. Anti-Covid-19 measures such as vaccines, lockdowns, and masking are products of academic research and thus open to criticism. Public health expertise is targeted because it is a field that intersects the social and natural sciences, but the ire of anti-vaxxers also stretches into the very heart of natural sciences when disputing and attacking the results of medical and biological studies. The pandemic has moved right-wing discourses from a rejection of social sciences towards a more general rejection of science and academic authority as such (except for some handpicked “real” academics who happen to defend right-wing causes).

As an important means to justify this rejection of science and academic institutions of knowledge, right-wing discourses creates a dichotomy between the rational, reasonable, and “common sense” knowledge of the many against the irrational, brainwashed, and hysterical zealots on campus who have fallen prey to the propaganda of a powerful elite. In the context of anti-gender activism, this representation is captured in the image of the “Social Justice Warrior” (SJW). This image has made its way from the far-right fringes of the internet to the mainstream and has been disseminated in countless memes (like the one below). It is highly gendered and ripe with misogynist stereotypes. The image constructs the mostly female SJW as irrational, hysterical, and incompetent and someone backed by a supposedly powerful academic elite. Due to the irrational rage females are accused of holding, the SJW is also depicted as willing to inflict violence on those who disagree with them on “leftist topics” of social justice. Prominently displayed topics include gender identity and vaccines. Identifying academic experts in gender studies and (public) health as irrational but simultaneously powerful and violent serves to both delegitimize academic expertise and justify the resistance against it as an act of self-defense borne from reason and common sense. 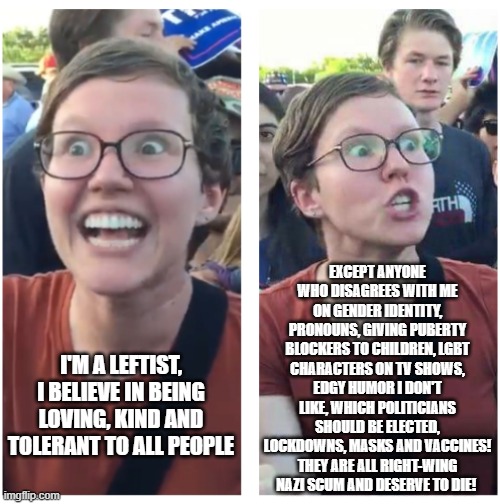 Falsely casting one’s own activism as self-defense against oppression is an element that unites right-wing populist and fascist mobilizations across geographical and social contexts[2]. A striking parallel between anti-gender and anti-vaccine narratives is how the threats they claim they are responding to are framed as a direct threat to the integrity and autonomy of the physical body. Disregarding the fact that the idea of gender diversity is closely related to the fight for rather than against bodily autonomy, anti-gender “ideology” narratives almost always assert that the intent of gender advocates is to break down the binary heterosexual body and replace it with a gender-less ideal. This counterargument is based on right-wing advocacy’s core conviction that a person’s body must not be anything other than one compliant with cis-hetero norms. Different bodies thus automatically become a threat to one’s own body, an assertion common in anti-trans discourses. In the case of vaccines, masks, and lockdowns, the connection of this right-wing position with one’s own body is even more directly tangible. A particularly powerful (while false) claim of the right has been that mRNA vaccines change the DNA of those vaccinated.

Another area that deserves particular attention and that plays a crucial role in both discourses is “the child.” The idea that children suffer extraordinarily from masks, vaccines, and lockdowns has been central throughout the pandemic, even though their exposure to the virus has not provoked the same level of concern and resistance. There was fierce resistance by some parents to school closures and school vaccination in the name of children’s safety (while at the same time some students advocated for more measures). This shows similarity to the narrative in conservative discourses that frame gender equality and anti-racist education materials in schools as undue state interference into family life. At the root of this narrative is the idea of a family as an apolitical unit. This is an assumption that has always been contested by feminist theorists and activists because it obscures how exclusionary and violent structures in society have been reproduced for centuries through family politics.

The Result: The Politics of Dehumanization

It is this obscuring of the exclusion and violence of existing societal structures, or more precisely in the process of dehumanization that accommodates them, where the most horrific of the overlaps between the right’s anti-gender and anti-vaccine discourses are found. At their heart, both gender equality policies and many anti-pandemic measures serve and protect groups that are particularly vulnerable, both due to their physical health and their sexual and gender identities. Moreover, the pandemic and gender-based violence have been shown to interact with racist and classist societal structures to disproportionately affect communities of color. While anti-Covid measures such as masks, vaccines, and lockdowns tend to be justified in a variety of ways (some more, some less problematic), they do offer a way to protect those most vulnerable to the virus. In a similar way, feminist policies are mostly have been geared towards those who are particularly vulnerable to the (social) pandemic of patriarchy.

Upholding the rights of LGBTIQ+ persons is meant to counter the structural and interpersonal violence they experience under the status quo. The direction of right-wing discourses is the opposite. Right-wing discourses do not simply deny the need for vaccines and gender equality; they deny the very existence and legitimacy of those whose lives depend on such policies. In both discourses, this becomes blatantly obvious in the much-voiced assurance: “There are not many of those.”  Such discourses neglect the real-life experiences of all those who are not young, able-bodied, cis, hetero, or white carriers of privilege. While this has always been obvious in anti-gender discourses, where those experiences are often simply presented as lies, the anti-Covid discourse exposes even more blatantly the absolute and unimaginable violence of right-wing bio-politics.

The goal of feminist advocacy has always been to make visible the abuse suffered at the hands of the discriminatory structures of inherently racist and cis-hetero-patriarchy that is the basis of society. As has become clear from the parallels in right-wing discourses on both gender and the pandemic, this includes those whose lives and health are at stake because of the Covid-19 pandemic, many of whom are also the victims of the systemic intersecting pandemics of capitalism, racism, and patriarchy. While this is not always necessarily the case, from an intersectional and standpoint feminist perspective, advocating for those vulnerable to the health effects of the pandemic must therefore also be a natural part of feminist advocacy.

The opinions expressed here are solely the author’s and do not necessarily reflect the opinions and beliefs of Women In International Security or its affiliates.

Ann–Kathrin Rothermel is a Ph.D. student and research associate at the University of Potsdam and a research affiliate at the Berlin Graduate School for Global and Transregional Studies. She is also a Fellow with the Institute for Research on Male Supremacism. Her research focuses on the role of gender in regard to both radicalization and counter-radicalization in terrorism and violent extremism. After having completed a fellowship at the United Nations Secretariat in New York, she started her Ph.D. in 2016 focusing on gendered discursive struggles in the context of global counterterrorism reform by the UN. She has published several articles on the radicalization in antifeminist, male supremacist online movements.

[1] A different version of this article was published at: https://blogs.lse.ac.uk/gender/2022/04/11/what-anti-gender-and-anti-vaccines-politics-have-in-common-the-construction-of-gender-and-the-covid-19-pandemic-in-right-wing-discourses/